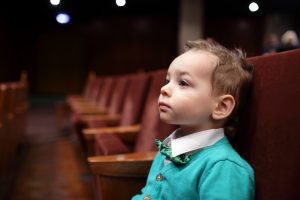 For parents and caretakers with autistic kids, simply venturing out the door and into public can sometimes be risky business. The vibrant crowds, bright colors, and noisy hubbub that may delight most kids can quickly trigger autistic children’s hypersensitivity to sights, sounds, and smells. Fortunately, as public acceptance and understanding of autism has increased, so too have the number of companies and other institutions willing to do more to accommodate the peculiarities of the condition that affects so many. Here are just a few of the sensory-friendly experiences that have recently begun to make going out less daunting for tykes with autism.

This month, Chuck E. Cheese announced that over fifty of its Northeast locations would begin offering “sensory-free” hours in order to cater to children with autism and other special needs. Between 9 and 11am on the first Sunday of every month, the kids’ restaurant/playplace chain will dim its lights, turn down the music, and allow outside food so as to accommodate any dietary needs or idiosyncrasies. Chuck himself and his mascot friends will also be kept in the back away from vulnerable eyes, which is good for both the kids and any adults who don’t want their next night’s sleep disturbed by singing animatronics.

The always stressful holiday shopping season was a little less overwhelming for kids with autism in 2016. Toys R Us locations in the United Kingdom offered a sensory-friendly shopping hour on November 6, during which the stores reduced the glare of their fluorescent lights and refrained from any in-store music and PA announcements. U.S. Target and Costco locations followed suit with similar early-morning quiet hours in December. Hopefully, these and other mega-retailers will continue this trend in 2017.

Take it from me: when you’re a young child, you’re most likely going to be terrified of sitting on Santa’s lap at some point. However, as a child with autism, when you are able to drum up the strength to visit Santa, waiting in line in an overcrowded, over-decorated mall to meet a large, jolly man in a bright red suit can be especially unsettling. Which is why the Noerr Programs Corporation offered a series of annual sensory-friendly Santa experiences at malls across America this past holiday season. The Caring Santa, Santa Cares, and Sensitive Santa programs visit malls in most states, where kids can meet Mr. Kringle in a controlled, quiet, distraction-free setting.

AMC offers regular autism-friendly first-run film screenings at over 170 participating theaters nationwide. Break out the popcorn and drop by the second and fourth Saturday of each month for family-friendly films and the second and fourth Tuesday for flicks intended for adult audiences (check your local listings for showtimes). At each screening, the lights stay up, the sound gets turned down, and the usual theater decorum is eschewed in case any audience members feel the need to talk or walk around in order to get comfortable. Word of advice: it may still be a good idea to avoid any typically loud, action-filled movies. Even with a more toned-down theater atmosphere, a movie like the next Transformers could trigger sensory overload.

The ballgame, the crowd, the noisy root, root, rooting for the home team (and the peanuts and Cracker Jacks too) – a Major League Baseball stadium doesn’t seem like it would be the most comfortable place for children with autism. However, all 30 MLB teams host Autism Awareness games—usually during Autism Awareness Month in April—every season. Not only do part of each of these games’ proceeds go towards autism research, but many stadiums designate Quiet Zones where kids and adults can enjoy the action in less overstimulating environments.

The support and accommodations for people with Autism grows each day. This list, along with any other suggestions, would be helpful for school therapists to share with parents who are looking for activities outside the home.